Why is the motor soft-started?

During soft start, the starting current is generally 2 to 3 times the rated current, and the grid voltage fluctuation rate is generally within 10%, which has very little impact on other equipment.

2. Impact on the grid

The impact on the power grid is mainly manifested in two aspects:

2) The starting current contains a large number of high-order harmonics, which will cause high-frequency resonance with the power grid circuit parameters, resulting in faults such as malfunction of relay protection and automatic control failure.

The starting current is greatly reduced during soft start, and the above effects can be completely eliminated.

1) The Joule heat generated by the large current acts on the outer insulation of the wire repeatedly, which accelerates the aging of the insulation and reduces the service life. 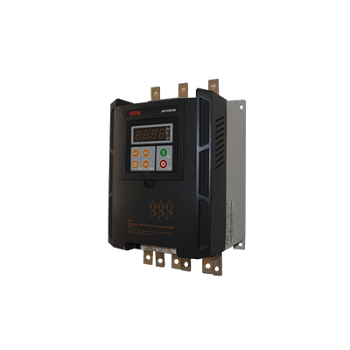 2) The mechanical force generated by the high current causes the wires to rub against each other, reducing the insulation life.

3) The jitter of the contacts when the high-voltage switch is closed will generate an operating overvoltage on the stator winding of the motor, sometimes reaching more than 5 times the applied voltage. Such a high overvoltage will cause great damage to the motor insulation.

4. The damage of electric power to the motor

During soft start, the impact force is greatly reduced due to the small maximum current.

The starting torque of full-pressure direct starting is about twice the rated torque. Such a large torque is suddenly added to the static mechanical equipment, which will accelerate gear wear and even tooth beating, accelerate belt wear and even break the belt, and accelerate fan blades. Fatigue or even broken blades and so on.

The torque of soft start will not exceed the rated torque, and the above drawbacks can be completely overcome.

The three-phase asynchronous motor is the most commonly used in engineering. Due to its motor starting characteristics, these motors are directly connected to the power supply system to start (hard start), which will generate a surge (impulse) current as high as 5 to 7 times the rated current of the motor, making Overload of power supply system and switchgear connected in series. On the other hand, direct start also produces higher peak torque. This kind of impact will not only impact the driving motor, but also damage the mechanical device, and also affect the normal operation of other electrical equipment connected to the same power grid.

The birth of squirrel-cage asynchronous motor electronic soft starter solves this problem. It can not only change the starting characteristics of the motor to protect the drag system, but also ensure the reliable starting of the motor and reduce the starting impact. Therefore, with the rapid development of power electronics technology, intelligent soft starters will be more widely used.

How does a soft start AC work?

1. No inrush current. When the soft starter starts the motor, by gradually increasing the conduction angle of the thyristor, the starting current of the motor increases linearly from zero to the set value.

2. Constant current start. The soft starter can introduce current closed-loop control, so that the motor can maintain a constant current during the starting process and ensure the smooth start of the motor.

3. According to the load condition and the power grid relay protection characteristics, it can be freely adjusted from the stepless to the best starting current.

4. Reduce the starting current of the motor, reduce the power distribution capacity, and avoid investment in capacity expansion.

5. Reduce the starting mechanical stress and prolong the service life of the motor and related equipment.

6. The starting parameters can be adjusted according to the load to achieve the best starting effect.

7. A variety of startup modes and protection functions are available, which are easy to improve the process and protect the equipment.