Discussion on the Application of Motor Soft Starter

With the continuous advancement of power electronic technology, motor soft starters are favored by all walks of life for their excellent functions, and their applications are becoming more and more extensive, gradually replacing star-delta starters and auto-decompression starters on old equipment.

The basic principle of the motor soft starter is to use a bidirectional thyristor in series in the main circuit of the motor, adopt the principle of phase shift control, and use a microprocessor to change the degree of conduction of the thyristor, and the output voltage rises according to a pre-designed curve, thereby reducing the starting current of the motor value.

At present, there are a wide variety of domestic motor soft starters, and their functions are also increasing. Now on how to choose correctly, I will share some opinions for your reference.

The Selection of Motor Soft Starter

First decide if a step-down start-up is required. For example, some people even use a soft starter for a motor of about 20 kW in the distribution circuit of the large-capacity low-voltage system that is closer to the substation.

This is actually harmful and unhelpful, not only increasing the investment, but also bringing trouble to the maintenance. Some people think that there are more microelectronic products now, and the quality requirements for voltage are strict. If the voltage drop or soft start is not used, the fluctuation of the grid voltage will affect the normal operation of the above equipment. This is not the case in reality, and equipment with strict requirements on voltage quality usually has its own voltage regulator.

In order to correctly select the motor soft starter, it is necessary to analyze the nature of the load and the various functions of the motor soft starter. There are light, medium and heavy loads. Generally, heavy-duty equipment such as long belt conveyors, crushers, roller compactors, grinders and mixers. When this type of equipment suddenly loses power during operation, there is still surplus material in the machine, and it becomes a heavy-load start when it is restarted.

It should be pointed out that some people often regard fans and pumps as light loads. In reality, this is not the case. Because the flow is proportional to the speed, the wind pressure (head) is also proportional to the speed, and the shaft power required by the fan and pump is proportional to the cube of the speed. Therefore, as the speed of the fan and the water pump increases, the resistance increases, which prolongs the start-up time, and causes the thermal relay to act frequently during the start-up process, which is a heavy-duty start-up device. For heavy-load starting equipment, the motor must output a large torque. Therefore, when selecting a soft starter, a soft starter for heavy-load starting should be used. If a common type is used, the capacity should be increased by one level.

At present, the soft starter has moved towards intelligence. In addition to satisfying the starting function, there are also protections such as overload, undervoltage, phase imbalance, reverse phase and negative sequence. Some panels are equipped with touch screen, display screen, logic menu, communication module, etc., making on-site adjustment simple and easy. In addition, there are self-test function, fault display and alarm function. These components and functions are completed by each module. When designing, selecting and ordering, certain functions should be selected according to the actual application, otherwise it will cause waste.

Selection of other Electrical Appliances in the Soft Start Circuit 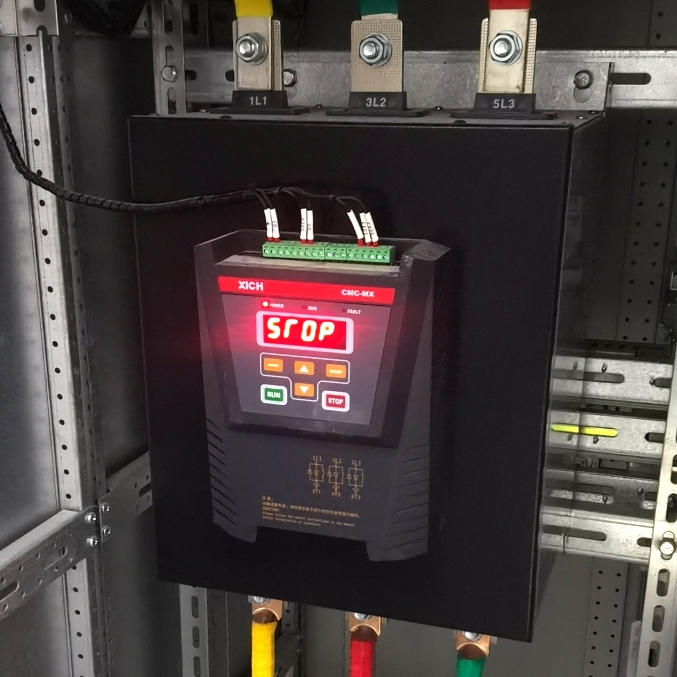 AC is the English abbreviation of alternating-current, and the -number indicates the type of contact.

-2 indicates the starting and breaking of the wound induction motor;

-3 indicates the start of the cage induction motor and the interruption during operation;

-4 indicates the start of the squirrel induction motor, reverse braking or reverse operation, and electric.

Sometimes a soft starter is used to start multiple motors in order to save investment. Special attention should be paid to the fact that the starting interval of the soft starter should not be less than 5 minutes. When the driving equipment is multiple fire equipment motors, the starting time is too long to meet the fire fighting time requirements, so it cannot be used. However, it is worth considering the one-for-two scheme of one working and one standby equipment with the same capacity. To adopt the one-to-many solution, it is only necessary to install a fast fuse in the soft-start circuit. In normal operation, the contactor in the main circuit of each motor only acts as a bypass contactor, and the working category is AC-1, so its rated current is almost equal to 1/2 of the rated current of the motor. This saves investment and is more secure.